In 1813 explorers Blaxland, Lawson and Wentworth found a way across the Blue Mountains to the western plains. Settlers from the plains brought their stock to the greener high country around the Oberon district in drought periods. The lush countryside attracted settlers and grants of land began to be taken up along the Fish River and the Campbells River in the 1820s.

The early pioneers knew Oberon as Bullock Flat. Permanent settlement in the district began in 1839 but it was not until 1863 that the name was changed to Oberon (taken from the King of the Fairies in Shakespeare’s “A Midsummer Night’s Dream”) and it was declared a village. From a town population of 200 in the 1880s it is now growing to 2,700 in 2006. 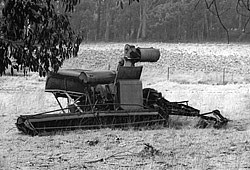 Gold was discovered on the Fish River in 1823 and this gave the area a boost in population. There have been many silver and copper mines in the district and the area is still well known for its sapphires and gemstones which attract many fossickers.

In 1949 the first stage of the Fish River Water Supply known as Lake Oberon was completedand the building of this important water supply to Lithgow, Bathurst, Oberon, and parts of the Blue Mountains brought many workers and their families to the district. The project was completed in 1958.

The plentiful supply of hardwood in the district attracted the attention of the Broken Hill mines in 1938 and the timber was transported by rail to be milled at Broken Hill for pit props.

As hardwood areas ran out they were replanted with Pinus Radiata by the Forestry Commission and this was the foundation of the timber industry in Oberon which has further swelled the population.

For almost 50 years peas and potatoes were important crops in the Oberon district and for many years fat lamb production was a major economic contributor. From about 1930 when plantings of Radiata Pine began, the timber industry has become increasingly economically important.

Oberon’s proximity to Jenolan Caves, the Kanangra Boyd National Park, and its unique climate and spectacular scenery as contributed to the continuing growth of the town.

Most early buildings in Oberon were built of pise, wattle and daub or slabs from local timber. Most have not survived. The convent on the corner of Queen and Fleming Streets was built in 1914 for the Sisters of St Joseph who had arrived in Oberon in 1912 to set up the first Roman Catholic school. It is still occupied by the Sisters. Amongst Oberon’s significant buildings are the National Australia Bank building, St Barnabas Anglican Church,  built in 1869, Ramsgate, a two storey Victorian private residence built in 1906, and the Art Deco Malachi Gilmore Hall  built in 1937 the front of which is now Cobweb Craft Shop. All three are in Oberon Street.

Further a field, there are several European heritage items within the shire: the limestone bridge near the Grand Arch at Jenolan, the Tarana-Oberon railway line, the Sidmouth Valley-O’Connell Road, Phil’s Falls, 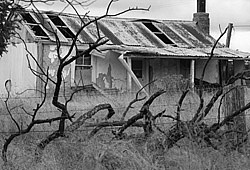 The Oberon Museum, once the railway station, has a good collection of items of local historical interest.  It is open from 10.30am to   5pm every Saturday and at any other time by appointment. Contact Oberon Museum.

Oberon Military Museum houses an array of weapons from the Boer War to the present day, both real and replicas. Work your way through an extensive library of books, videos and dvds, displays of medals, trophies and photos and histories of some of the young men from the local area. Bring a picnic with you and lunch in the tranquil surrounds of the memorial gardens or enjoy a tea or coffee available in the museum. Opposite the RSL Club, the Military Museum is open 12.30 – 4.00pm Wednesday and Friday, 10.00am – 4.00pm Saturdays and Public holidays, or on request. Contact 0438 615 653 or 0408 610 848.

Cobweb Craft Shop has on display the 8 Bicentennial Tapestries, designed by artist Kim Rabbidge and stitched by over 70 local needleworkers. These works of art depict not only the landscape and primary industry but also examples of historic buildings.

The Oberon Council Chambers has on display a collection of caricatures and memoirs of Oberon’s “living treasures” by Mick Joffe. 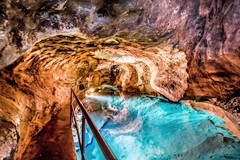 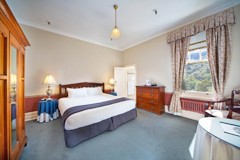